It is difficult to pinpoint just when the trend of darkening the once flamboyant superhero action movies began, but just like all those New Online Casinos appearing out of nowhere everywhere, it seems that the trend is here to stay. After Nolan’s realistic, drama-heavy re-imagining of the Batman, the Spiderman got a similar kind of treatment in the last year’s reboot. Now, the next one to undergo such a makeover is Superman. Or to put it more appropriate, Man of Steel.

I remember how Superman movies of my childhood had something colourful and bright about them. Even the notorious Krypton villains seemed to step out of a comic book. I remember what general Zod was like – and no, I wasn’t afraid of him. 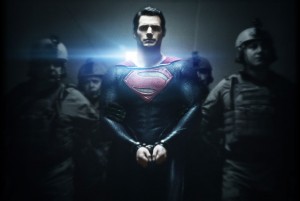 And now? Behold the change: this here is not a general Zod I’d like to encounter as a child – not on a television, and even less so on a big screen. Despite that, I must say that a somewhat creepy viral video promoting the movie is pretty awesome, and actually got me interested in seeing Man of Steel once it hits the theatres.

What we now know is that the upcoming movie will feature Krypton villains attacking Earth, where Superman will stand as our best line of defence. The cast of characters will feature Henry Cavill as the titular superhero, Diane Lane and Kevin Costner as his adoptive parents, Russell Crowe as his biological father Jor-El, Amy Adams as Lois Lane, Laurence Fishbourne as Perry White, and Michael Sheenan as general Zod.

For one thing, after seeing Watchmen, I believe Zack Snyder has what it takes to make the new Superman film spectacular. Add to that Christoper Nolan in the role of producer, and it really seems that the Superman movie franchise might be getting ‘The Dark Knight treatment’. Man of Steel is set to premiere on June 13.